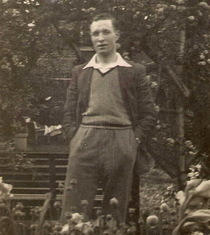 Our colleague Andrew Behan has kindly researched this man: Auxiliary Fireman Herbert Charles Wotton was born on 15 May 1910 in Rotherhithe, Surrey, the second son of the thirteen children of Alfred Samuel Wotton and Harriet Wotton née Keene. His father was a Engineer's Labourer at a Spice Grinders. He was baptised on 29 May 1910 at Christ Church, Rotherhithe and the family were living at 57 Park Buildings, Paradise Street, Rotherhithe. The 1911 census shows the family still at this address.

In 1934 he married Irene Dorothy Moore in Deptford and the 1935 electoral register shows them living at Flat 8, 3rd Floor, Essex House, Meeting House Lane, Camberwell. Their son Bryan H. Wotton was born in 1936. The 1939 England and Wales Register shows them living at 78 Upper Elmers End Road, Beckenham, Kent and lists his occupation as a Retail Butchers Manager. He joined the Auxiliary Fire Service and was attached to the Stanhope Grove Fire Station, Beckenham. He died when a German bomb landed on Auxiliary Fire Service Sub Station 24U, which was housed in Old Palace LCC School, St. Leonards Street, Poplar, aged 30 years, on 20 April 1941. He was buried at Beckenham Cemetery and Crematorium, Elmers End Road, Beckenham, BR3 4TD.

This section lists the memorials where the subject on this page is commemorated:
Herbert C. Wotton