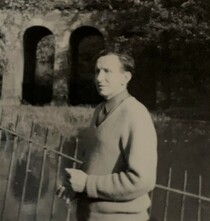 Stanley Ernest Clyde Boggis was born on 27 August 1921. His birth was registered in the Holborn registration district. He was the son of Clyde Percy Boggis (1890-1980) and May Helen Boggis née Sherwood b.1895. His father was shown as a Motor Engineer on their marriage register.

Electoral registers from 1928 show the family living at 68 Tyndale Mansions, Upper Street, London, N1 and this address is confirmed on the 1939 England and Wales Register that shows him as an Apprentice Draughtsman, living with his father and his sister Ivy May Boggis (1924-1991) who was shown as a Chemist Sundries Finisher.

2022: We were contacted by Stephen Pettit, the grandson of Ivy May Boggis, and he kindly found this photo of Stanley for us.

This section lists the memorials where the subject on this page is commemorated:
Stanley Boggis

58 local residents were killed and many more were injured in the Silvertown E...

From London Gardens Trust: "The bridge over the Regent's Canal to the north w...