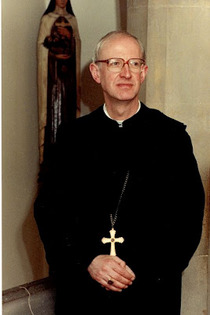 Searching for a picture we were shocked to find the picture source website where we learn that Soper was, in September 2012, wanted by the police " in connection with allegations of {historic} sexual assaults committed while he was a monk and teacher at St Benedict's." St Benedict's is part of Ealing Abbey, of which Soper was abbot from 1991 to 2000.

15 May 2016: The Telegraph reports that Soper has been arrested in Kosovo and the Met Police are “liaising with the authorities”.

7 December 2017: The Guardian reports that Soper (now with the first name Andrew) was found guilty of 19 charges of rape and other sexual offences. The first victim contacted the police in 2004 but Soper did not find it necessary to flee to Kosovo until 2010. And another 7 years before he was convicted. One hopes it would all happen much quicker nowadays.

21 December 2017: The Guardian reports that Soper was sentenced to 18 years, "... the fourth man at the school to have been convicted of abuse." We are glad we can now stop following this horrible story, that we chanced upon when researching a memorial to a brave man.

This section lists the memorials created by the subject on this page:
Abbot Laurence Soper

The full text from I Corinthians 13:4-8 reads: "Love takes no pleasure in oth...

A primary school, demolished to make way for the Bridge Academy. Our photo sh...