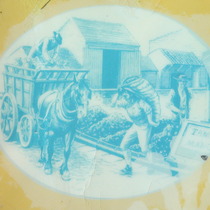 Formerly known as the Midland Railway Basin (though we could find nothing under thatn name). Opened as a coal wharf. 1958 converted to a pleasure craft area. Now home to the St Pancras Cruising Club. the 1870s water tower, just to the south of the basin was moved here from its original location, a few hundred metres to the west, where the Eurostar now runs.

The picture is taken from the plaque (we could find no other) and is captioned 'Unloading coal in St Pancras Basin the late 19th century'.

This section lists the memorials where the subject on this page is commemorated:
St Pancras Basin

The Ivy, opened by Abele Giandolini, as an unlicensed Italian cafe in 1917 in...