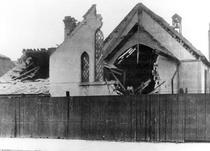 This National Library of Scotland 1914 map shows the "Missn Ch" between Eastwood and Westwood Road, just north of the tennis courts on what is now Britannia Village Green.

Opened in 1882 as a mission church of St Mark's Church, Silvertown. In the 1917 Silvertown explosion its chancel and iron hall were destroyed, leaving the congregation to use temporary buildings. The church was later rebuilt as a hall, which became the nave of a new church in 1926 when a separate parish was formed.

The new parish was mainly drawn from St Mark's, though it also took a small part of the parish of St Luke's Church, Canning Town. The vicar of St John's Church, North Woolwich administered it after 1945. In 1974 the parish churches of St Mark and St Barnabas were declared redundant and their parishes merged with St John to form the parish of North Woolwich with Silvertown.

The photo shows the church after the Silvertown explosion.

This section lists the memorials where the subject on this page is commemorated:
St Barnabas' church, West Silvertown

In 604 the Bishop Mellitus arrived from Italy as the first Bishop of London a...