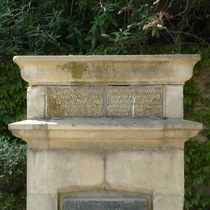 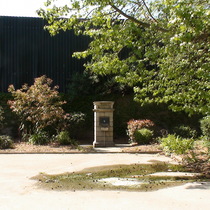 To the glory of God and in memory of the men of West Silvertown who fell in the Great War 1914 - 1918. Their names are recorded in a book in the Sanctuary of S. Barnabas Church. Erected by public subscription.

The inscription is carried by two glazed tiles, one of which has been broken and repaired.

There's a bit of a puzzle here. It's a fair assumption that this memorial was erected after the end of the war but St Barnabas Church was badly damaged by the Silvertown explosion in 1917, to the extent that the congregation went elsewhere, so it seems odd that the memorial says that the book is in the church. Surely the vicar arranged for everything of value to be removed from the ruin and stored elsewhere.

This section lists the subjects commemorated on the memorial on this page:
West Silvertown WW1 memorial fountain

This National Library of Scotland 1914 map shows the "Missn Ch" between Eastw...

2022: Sebastian Bulmer told us about AngloBoerWar which has extensive photogr...

The new plaque (not shown) is rather brash but we like how the wording refers...

{Plaque on wall to left of sculpture reads:} Eclipse by Angela Conner. The wa...

Interesting that no artist is named for this sculpture. As far as we can tel...