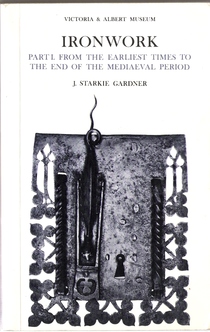 Sculptor of, and historian on, decorative ironwork. Also wrote on geology and botany and collected fossils. His company, based in Lambeth, did all the metal work at 2 Temple Place, inside and out, including the weather vane, the railings and the bulldog sign (*). Metalworker to King Edward VII for whom he made gates for Holyrood Palace. More details at GLIAS. We could not find a picture of Gardner so here is a picture of one of his books.

* The Victorian Web says that Gardner did the bulldog sign on the exterior. But via Facebook Tessa Stevenson has pointed out that the Bulldog Trust only took on the building in 1999. Looking at the sign (Victorian Web has a photo) the dog itself bears no Gardner traits while the bracket and the arch above the dog are very Gardner. Tessa has tracked down some facts and we find the results of her research convincing:
The original building had carved urns and Astor's armorial shield over an elaborate pair of iron gates with decorated piers, but no ornamental sign (see the 1920s photo from the Astor sale catalogue, reproduced in ‘Two Temple Place’ by Barbara Bryant ISBN 978-0-9570628-2-5 page 25). In the 1920s the Sun Life Assurance Company of Canada, who owned the building 1919-28, commissioned Gardner to create an ornamental sign (ibid page 86), presumably the insignia of the company. This was then replaced by the Society of Incorporated Accountants when they purchased the building in 1928 (see the pamphlet ‘Incorporated Accountants Hall, Its History and Architecture’ by J R Willis Alexander, 1935 edition, pages 15 and 16). Seems likely that they kept Gardner's bracket/arch and just replaced the sign. And that the Bulldog Trust did the same when they took over in 1999.

This section lists the memorials created by the subject on this page:
J. Starkie Gardner

apprentices and masons of CWO Ltd

Born Australia, came to London in the mid-50s and worked in music, antiques a...