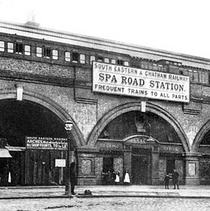 A terminus of the London and Greenwich Railway, London's first railway. The original station was badly located and had a very narrow platform. Passengers were supposed to queue on the steps outside, but actually waited on the track itself! When London Bridge station opened, usage of the old station declined and it closed in 1838. The viaduct on which it had stood was eventually widened and with increased public demand, a new station opened in 1842. In 1867 it was relocated further along the viaduct. It was closed as a wartime security measure, and never re-opened.

By the 1860s the construction of railways in London was extensive. One of Anthony Trollope’s characters is “… having to meet a synod of contractors, surveyors, and engineers, to discuss which of the remaining thoroughfares of London should not be knocked down by the coming of the railways…” (‘The Claverings’, 1866-7).

Southwark News has a post about the station's history.

This section lists the memorials where the subject on this page is commemorated:
Spa Road Station

Rail company. It had lines connecting the north of London to the East a...

route to market via Hackney

The route to Bishopsgate can still be seen clearly on a current map, wending ...