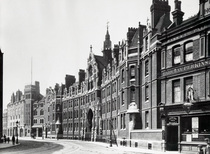 This location has hosted 4 buildings important to the history of the London Fire Brigade.  We’ll tell the story chronologically.

In 1777 a new St Saviour’s workhouse, by George Gwilt the Elder, was opened at this location, at the end of Pepper Street, shown on this 1792 map. Early in the nineteenth century part of it became a hat factory and the eastern wing (grey brick with white classical pilasters, facing what is now Southwark Bridge Road) was aggrandized and converted into residential. In 1878 this building (the whole site, we believe) was acquired by what was then the Metropolitan Fire Brigade, together with the adjoining site to the south on Southwark Bridge Road. The existing building became the Brigade’s captain’s, Massey Shaw's residence and the Brigade headquarters and training centre. It was possibly at this time that it was given the name Winchester House.

The site was developed to serve its new function: in 1878, the fire station by Alfred Mott was added to the south (red brick, with 3 fire engine entrances and a watch tower); in 1883 a grand Gothic wing by Robert Pearsall, Mott's successor as chief architect, was added to the east, hiding the former workhouse building from the main road; a practice tower was added to the rear c.1880 by Mott; and finally the fire station extension by the Fire Brigade Branch of the London County Council Architects Department, job architect W. E. Brooks (red brick with 4 fire engine entrances plus another entrance) was added in 1911.

This 1889 map show the workhouse being used as 'Chief's residence', etc. and buildings in front of it, labelled 'dwellings' with 3 and a half storeys – the Pearsall Wing which was damaged in the Blitz and demolished in the late 1960s.

While the buildings around the old workhouse courtyard may have housed some fire brigade staff, the courtyard itself was the ‘drill yard’ and it was here that the vast majority of those joining the force 1960s - 90s did their initial training. In 1994 the training centre was completely overhauled and refurbished. Ironically it closed not many years later, mainly due to the expensive damage caused by a fire. The construction of a ‘Fire House’, a replica of a home fitted with gas and electrical appliances for training purposes, was, in 2004, already running late and subject to legal wranglings.

Of the handful of early fire stations designed in the 1870s only Tooley Street, Hampstead and this section of the station at Southwark survive; Southwark is thus of special interest for its rarity. Southwark is the most influential of these surviving stations because, as headquarters, it established a prototype for stations built across London in the 1880s.

2021: Brigade Court is in development - a residential conversion encompassing all the buildings discussed here. 1NewHomes have a useful aerial photo.

Our c.1920s photo comes from Beyond the Flames - a terrific site if you want to know about the fire service, and they have a great page on these buildings, with lots of pictures. This one, reading from right to left, shows: the Fox and Hounds pub (extant); the Gothic Pearsall wing (demolished in the late 1960s); the 1878 Mott fire station with tower; the 1911 Brooks extension. Beyond the Flames closes with "If the LFB had a soul Southwark was it keeper."

This section lists the memorials where the subject on this page is commemorated:
Southwark Fire Station, HQ and Training Centre