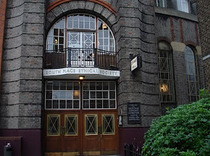 Possibly the oldest surviving free thought organisation in the world, and the only remaining Ethical society in the UK. Originated as a religious group, allied to the Baptists. By 1793 they had their first chapel in Parliament Court, Bishopsgate. William Johnson Fox became minister in 1817, by which time the group was Unitarian, and arranged for the building of a new chapel, in 1824, in South Place. Moncure D. Conway was minister 1864–85 and 1892–7. The group took its present name in 1888 and after Conway had no more ministers but a rota of appointed lecturers, including: Lord Brockway, Nicholas Walter, Barbara Smoker. In 1926 new premises were built: Conway Hall, at 37 Red Lion Square (pictured). The Society still holds meetings there and events such as Anarchist Book Fairs.

Founded by Arthur Torrington and Samuel B. King. Its main objective is to pub...

In the fifteenth century this was the Horn tavern. In the early seventeenth c...

Often referred to as 'Gooners', being a play on the team's nickname of the 'G...