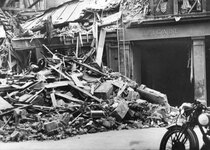 West End at War has another photo showing the damage to the building above the fire station. Here we learn that "Shaftesbury Avenue Fire Station (built in 1887 and renamed the Soho Fire Station in 1921), suffered severe damage and was virtually demolished. Two passers-by sheltering in the doorway were killed and several firemen inside the Station also died or were seriously injured. Three fire engines were covered in debris and the Station entrances were completely blocked. Survivors from the building escaped by sliding down the debris, dazed but otherwise unhurt. In 1942, a temporary station structure was put in place; this building remained in use until a new Soho Fire Station was opened at 126 Shaftesbury Avenue in 1983."

Firestations has a photo of this station 29 July 1981, showing the "temporary station structure" which served for over 40 years.

This section lists the memorials where the subject on this page is commemorated:
Soho Fire Station WW2 bomb

Pastor and evangelist killed during the Chinese cultural revolution.