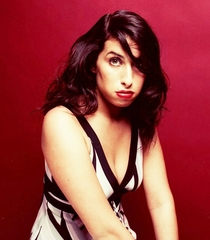 Singer and songwriter. Born Amy Jade Winehouse in Southgate, she began writing music in her teens, and became a singer with the National Youth Jazz Orchestra in 2000. Her debut album 'Frank', was released in 2003 and achieved platinum sales. Having developed a reputation for being unreliable because of alcohol abuse, she went into rehab and used the experience for the title song 'Rehab' in her highly successful album 'Back to Black'.

She had been a frequent smoker of marijuana and graduated to harder drugs. In spite of winning many awards, her behaviour became more and more erratic. Her last public appearance was at the Camden Roundhouse on 20th July 2011, three days before she was found dead at her home in Camden Square.

This section lists the memorials where the subject on this page is commemorated:
Amy Winehouse

Born London. Entertainer and author. Created a number of the great Gilbert an...