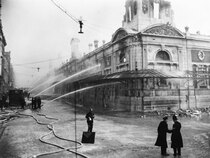 On 23 January 1958, a fire broke out in the basement of Union Cold Storage Co at the Smithfield Poultry Market. The fire spread throughout the maze of basements under the market and burned for three days. Over 1,700 fire fighters with 389 fire engines were required to bring the blaze under control.

Two fire fighters were killed (Fourt-Wells and Stocking) and 50 were injured or treated for smoke inhalation. The Poultry Market was largely destroyed and large portions not directly affected by fire collapsed as basements caved in. The replacement building was opened in 1963.

The introduction of breathing apparatus by the London Fire Brigade was a direct result of the fire.

The London Fire Brigade describes the fire as "One the London's worst fires since the Blitz".

This section lists the memorials where the subject on this page is commemorated:
Smithfield Market Fire, 1958

Born Texas. Aged 18 was convicted of killing a taxi driver and was executed i...

A telecommunications engineer from Gavdik in Norway. Killed in the Ladbroke G...