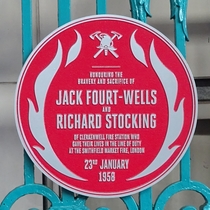 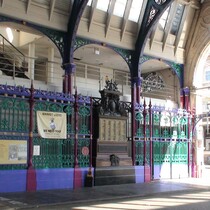 Honouring the bravery and sacrifice of Jack Fourt-Wells and Richard Stocking of Clerkenwell Fire Station who gave their lives in the line of duty at the Smithfield Market fire, London, 23rd January 1958.

To mark the 60th anniversary of the fire this plaque was unveiled, on one of those temporary easel things (looks like a flip-board stand covered in velvet cloth), and was not in place on the building when we first visited in April 2018, but it was up by early March. The railings are probably listed which complicates the job of attaching a plaque.

This section lists the subjects commemorated on the memorial on this page:
Fourt-Wells + Stocking

This section lists the subjects who helped to create/erect the memorial on this page:
Fourt-Wells + Stocking

From their website: "The FBU is one of the UK’s oldest specialist trade union...

This section lists the other memorials at the same location as the memorial on this page:
Fourt-Wells + Stocking

Near this place on July 29th 1921 George Lansbury led the people and councill...

London Plane Platanus X Hispanica. This tree was planted by his Worship the M...