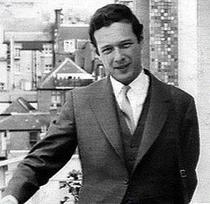 Beatles' manager and impresario. Born Liverpool. Homosexual and artistic, briefly studied at RADA, then joined the family retail business. Involved in the local music scene he spotted the Beatles and became their manager in 1961. He created a management company NEMS (named after his family's record shop, North East Music Stores) and went on to sign other Liverpudlian favourites: Gerry and the Pacemakers, Billy J. Kramer, Cilla Black, the Fourmost, the Big Three, etc. In 1963 he moved NEMS to London, to the Monmouth Street office. Great success followed but his personal life was troubled and, after one failed suicide attempt in 1966, he was found dead in 1967 at home, 24 Chapel Street, Belgravia. In 1998 Paul McCartney said 'If anyone was the fifth Beatle, it was Brian'.

This section lists the memorials where the subject on this page is commemorated:
Brian Epstein

The period that Epstein and his company, NEMS, occupied these offices was fro...