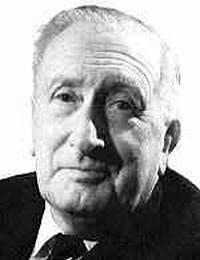 Composer, born William Turner Walton at 93 Werneth Hall Road, Oldham, Lancashire. Educated at Christ Church, Oxford, he befriended Sacheverell Sitwell and became a protegé of him and his siblings Edith and Osbert. His major works include 'Facade' and 'Belshazzars's Feast'. He was also a prominent composer of film scores, including Laurence Olivier's 'Hamlet' and 'Henry V'. Knighted in 1951 and awarded the Order of Merit in 1967. Died at La Mortella, Ischia, Italy.

This section lists the memorials where the subject on this page is commemorated:
Sir William Walton

Musician. Born Alexis Andrew Nicholas Koerner in Paris. His family moved to B...

Musician. Born in Bradford. His father was a Bangladeshi immigrant who ran a ...