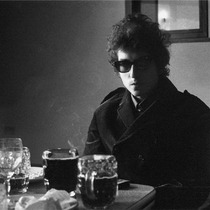 Musician, singer-songwriter. Born Robert Allen Zimmerman in Minnesota. He was invited to appear in a BBC TV drama ‘The Madhouse on Castle Street” and consequently he was in London December 1962 – January 1963.  His role in the play included singing “Blowin’ in the Wind” but the tape was wiped, as were most TV recordings at that time. During this first visit to the UK he appeared at a number of London venues including The Troubadour, Les Cousins, Bunjies and The Water Rats. The picture shows him in BBC TV studios in 1965.

This section lists the memorials where the subject on this page is commemorated:
Bob Dylan

The Guardian has a photo of Dylan performing at the 'Singers Club'. This clu...

Musician. Born Alexis Andrew Nicholas Koerner in Paris. His family moved to B...

Violinist and composer of light music. Born Yorkshire into a musical family, ...