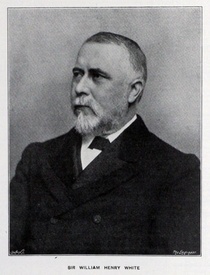 2014: Via Facebook Martin Evans suggests this man for the name panel at IC.  His close links with IC are indicated by him becoming a governor at the same time that the building was being erected.  We’re convinced.

Born Devonport, apprenticed to the naval dockyard there and also trained at the Royal School of Naval Architecture in South Ken.  He then worked for the Admiralty, designing ships, managing departments and gaining promotions where he stayed until 1902, with just a short interlude, 1883-5, when he worked for the Whitworth Armstrong company designing warships and overseeing their construction.  In his retirement he carried on working as a consultant and as president of a number of Engineering Institutes.  Governor of Imperial College from 1907 until his death at Westminster Hospital.

This section lists the memorials where the subject on this page is commemorated:
Sir William Henry White

The conversion to automatic operation of all the lighthouses and light vessel...