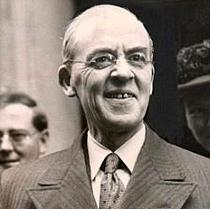 Politician and lawyer. Born Richard Stafford Cripps at 32 Elm Park Gardens, Chelsea. He initially pursued a career in the law, but this was interrupted by the outbreak of war in 1914. He joined the Labour Party in 1930 and served in Churchill's war cabinet. In this time he was sent to India on the ill-fated 'Cripps Mission' to negotiate the country's independence.
In the post-war Labour government, he served in several posts, being best remembered as a Chancellor of the Exchequer who introduced severe austerity measures.
Died at the Bircher Benner Clinic, Keltensstrasse 48, Zurich, Switzerland.

This section lists the memorials where the subject on this page is commemorated:
Sir Stafford Cripps