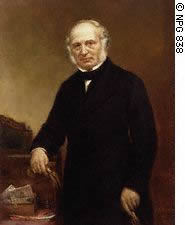 Initiator of the uniform Penny Post in 1840. Due to him Britain was the first country to use adhesive stamps and thus we do not have to put the name of our country on them. This is analogous to the United States not using the suffix '.us' in domain names. Conceived the idea of a post code - see Diamond Geezer for a good post (ha ha) on this topic. Before his interventions the cost of postage depended on the distance and was met by the recipient. Once the recipient did not have to pay the postie no interaction was required and the concept of the letter-box was born.

Was a little obsessed with the delivery of letters, to the extent that when he met Garibaldi at a banquet in 1864 all he could think to talk about was the Italian postal service.

He did not suggest renaming the Post Office 'Consignia'.

Born Kidderminster. Died at home at Bertram House, Hampstead, which (along with Miss Crump's Hereford House) we think is now the Royal Free Hospital and Rowland Hill Street.

This section lists the memorials where the subject on this page is commemorated:
Sir Rowland Hill

Designed by C. J. Phipps. The picture is taken from Cockspur Street. The buil...

Co-funder of the Reagan statue. American businessman and banker.

In spite of the plaque's claim, there is evidence of a cash dispensing machin...