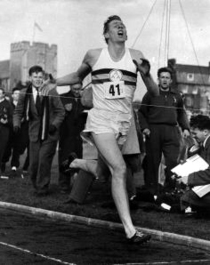 Athlete and doctor. Born Roger Gilbert Bannister in Harrow. While still a medical student, he won the mile event in the Oxford versus Cambridge match four times between 1947 and 1950, and was a finalist in the 1500 metres event in the 1952 Olympics in Helsinki. At an athletics meeting at Iffley Road, Oxford, he ran a mile in 3 minutes 59.4 seconds, breaking the long thought impossible barrier. His record only lasted 46 days however, when it was broken by the Australian, John Landy. He became the first chairman of the Sports Council (now called Sport England) and was knighted in 1975.

This section lists the memorials where the subject on this page is commemorated:
Sir Roger Bannister

This section lists the memorials created by the subject on this page:
Sir Roger Bannister

The medicinal powers of the spring were supposed to help people with poor eye...