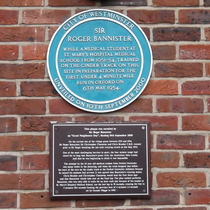 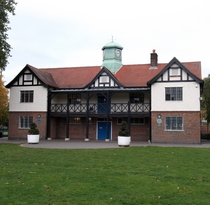 {Circular Plaque:}
Sir Roger Bannister while a medical student at St Mary's Hospital Medical School from 1951 - 54, trained on the cinder track on this site in preparation for the first under 4 minute mile run in Oxford on 6th May 1954.
City of Westminster
Unveiled on 10th September 2000.

{Rectangular Plaque:}
This plaque was unveiled by Sir Roger Bannister on "Good Neighbours Day", Sunday 10th September 2000.
On the current site of the village green between 1951 and 1954, Sir Roger Bannister, Sir Christopher Chataway and Chris Brasher C.B.E. trained prior to Sir Roger breaking the one mile running record on 6th May 1954.
One of the most challenging in sport, the four minute target had stood for so long that Bannister's great rival, the Australian John Landy said that he was beginning to think it was impossible.
The attempt by the 25 year old medical student from Oxford University was many weeks in the planning, and when the wind dropped just before the start of the race on the cinder track at the Oxford University athletics ground he sensed his moment had arrived. It was agreed that Bannister's running mates Chris Brasher and Christopher Chataway, would lead the first three laps and that Bannister would take over on the final lap. The plan worked perfectly. Bannister, who was only able to train for an hour each day because of his studies at St. Mary's Hospital Medical School, ran the last lap in 59 seconds, crossing the line 3 minutes 59.4 seconds beating the previous best of 4 minutes 1.3 seconds set by Gunder Hägge in 1945.

The Bannister plaques are the ones on the right of the pavilion, and the Wiggins one is on the left.

2018: From The Telegraph: "Paddington Recreation Ground - A cinder cycle track was built here in 1888, and replaced in 1900 by a banked track with an additional running track inside it. Paddington's track lasted longer than most of the others listed in this article; until 1987. The area that housed the cycle and athletics tracks is now a cricket pitch, and the only real sign of the past history is the grass bank parallel to Grantully Road."

This section lists the subjects commemorated on the memorial on this page:
Sir Roger Bannister

Founded as part of the new hospital in Paddington. It merged with Imperial Co...

Athlete. Born in Albacken, Sweden. He set over a dozen middle distance world ...

This section lists the subjects who helped to create/erect the memorial on this page:
Sir Roger Bannister

This section lists the other memorials at the same location as the memorial on this page:
Sir Roger Bannister

The quotes are from the New Testament: Hebrews.