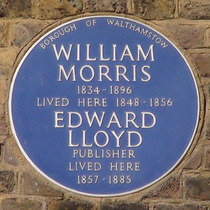 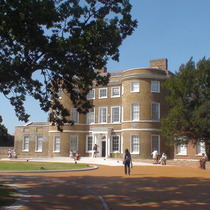 The house was known as Water House when the Morrises moved in, after the death of the father of the family.

Frank Lloyd (Edward's son) gave the house and gardens to Walthamstow Council in 1898, to be used by the public as a recreation ground - providing the council bought some adjoining land to be used as playing fields. Hence the surrounding gardens are 'Lloyd Park'. In 1950 the house became a Museum of Morris' life and works, recently refurbished as the William Morris Gallery.

This section lists the subjects commemorated on the memorial on this page:
William Morris and Edward Lloyd

This section lists the subjects who helped to create/erect the memorial on this page:
William Morris and Edward Lloyd

Walthamstow was a  local government district 1894 -1965 when it combined with...

Both lists gives the age of each person and, for the visitors, their home add...

Plaque unveiled on the centenary of his birth, plus 2 days.