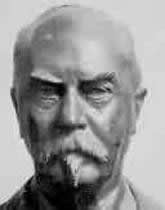 In his role at the Imperial War Graves Commission he designed the Cross of Sacrifice, which was was erected in almost every Commonwealth war cemetery. This design was also used in some memorials in the UK, e.g. Highgate School and the Chelsea memorial.

This section lists the memorials created by the subject on this page:
Sir Reginald Blomfield

Per adua {On the north facing side of the plinth:} In memory of all ranks of...