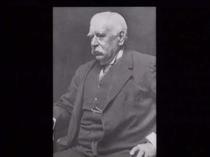 Born in Old Meldrum, Aberdeenshire. Physician who discovered that elephantiasis is spread by mosquitoes and suggested that mosquitoes also spread malaria.

Founder of the original London School of Tropical Medicine, his Wikipedia page gives a biography of his life.

Patrick Manson was born on 3 October 1844, the second of the eight children of John Manson (1804-1877) and Elizabeth Livingston Manson née Blaikie (1822-1905), in Oldmeldrum, Aberdeenshire, Scotland. He was baptised there on 20 October 1844. A plaque has been erected on the house where he was born.

He attended school at the Gym (Chanonry House School) in Old Aberdeen and the Academy, where another plaque has been erected in his memory.

In the 1861 census he is shown living at 22 King Street, Aberdeen, with his parents, six siblings: Forbes, David, Margaret, Alexander, Helen Blaikie Manson (1854-1919) and Alice Manson (b.1856), together with four female domestic servants.

He spent the period 1866-89 in Taiwan, China and Hong Kong, working as a medical officer and carrying out research into tropical diseases.

The 1891 census shows him as a physician living at 21 Queen Anne Street, Marylebone, with his wife, their five surviving children, a housemaid, a kitchen-maid, a parlour-maid, a cook, a nurse and a page boy. In the 1901 census he is recorded as a physician surgeon residing at Hill House, Bowstridge Lane, Chalfont St Giles, Buckinghamshire, with three of his children: Edith, David and Violet, together with his widowed mother and a female domestic servant.

As a medical advisor to the Colonial Office, the London Gazette records that on 26 June 1903 His Majesty King Edward VII, was graciously pleased to give directions for him to be made an Ordinary Member of the Second Class, or Knights Commander of the Most Distinguished Order of St Michael and St George (K.C.M.G).

In the 1911 census he describes himself as a physician, living at 50 Welbeck Street, London, with his wife, their unmarried daughter Mary Rose, their married daughter Edith Margaret Bahr and her husband Philip Henry Bahr (1881-1966), their grand-daughter Patricia Emily Manson-Bahr (1910-1992), together with a cook, a parlour-maid, a kitchen maid, two housemaids and a nurse. Electoral register from 1911 to 1921 list him at 50 Welbeck Street, London, W1.

He died, aged 77 years, on 9 April 1922 and is buried in Allenvale Cemetery, Allenvale Road, Aberdeen, AB10 7FF. Probate records confirm both his addresses as 26 Portland Court, Middlesex, and The Sheiling, Clonbur, County Galway, Ireland. Probate was granted on 9 June 1922 to the Public Trustee and his effects totalled £57,439-9s-6d.

This section lists the memorials where the subject on this page is commemorated:
Sir Patrick Manson

Doctor specialising in mental illnesses who classified what is now called Dow...