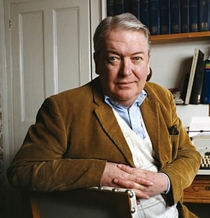 Novelist and poet. Born Kingsley William Amis in Norbury. His many novels include 'Lucky Jim', 'Take a Girl Like You' and 'The Old Devils'. He also wrote six volumes of poetry, and works of non-fiction. His son by his first marraige, Martin Amis, is also a writer. His second wife was the writer Elizabeth Jane Howard. He died in St Pancras Hospital, just north of King's Cross.

It is likely that the plaque is on the house where Amis was raised but not born. The Oxford Dictionary of National Biography gives his birth place as "102 South Side on the edge of Clapham Common" which we think might be what is now 1 Cavendish Parade, on the corner of the south side of Cavendish Road. Most reputable sources give Clapham as his birth place and Norbury as where he was raised, e.g. the 2020 book 'Kingsley Amis' by Richard Bradford gives "Kingsley Amis was born in a south London nursing home on 16 April 1922. He was an only child and from infant to early teenage years he lived with his parents at 16 Buckingham Gardens, Norbury SW16. His environment was comfortably suburban, lower middle class ...".

But this address also is surprising. The houses in Buckingham Gardens and in all the neighbouring streets are typical of those that made up the council estates erected between the wars.  These estates were occupied by the working class, not the lower middle. Even that description seems at odds with the wealth of the Amis grandparents.

This section lists the memorials where the subject on this page is commemorated:
Sir Kingsley Amis

Novelist. Born in Salem, Massachusetts. His ancestor was John Hathorne, the o...