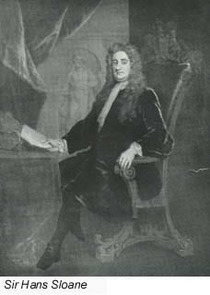 Physician, benefactor of the British Museum and an early benefactor to the Chelsea Physic Garden. Responsible for the addition of milk to chocolate to produce a palatable drink. Born Killyleagh, Ireland. He married a wealthy sugar plantation heiress and partly funded his collection from enslaved labour on Jamaican sugar plantations. President of the Royal Society and of the College of Physicians. Died at home, the Manor House in Cheyne Walk, which was demolished soon after his death. Buried at Chelsea Old Church.

August 2020: The Guardian reported that, following the Black Lives Matter protests, the British Museum announced that they had removed a bust of Sloane into a glass cabinet where Sloane's links to slavery will also be displayed.

This section lists the memorials where the subject on this page is commemorated:
Sir Hans Sloane

Royal Borough of Kensington and Chelsea The Chelsea Physic Garden was establ...

From their website: "Our aim is to preserve and promote Britain’s historical ...