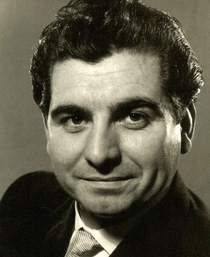 Opera singer. Born Geraint LLewellyn Evans in Cilfynydd, Wales. He took singing lessons in Cardiff before serving in the RAF in WW2. Later he studied in Geneva and in London at the Guildhall School of Music. He first appeared at the Royal Opera House in 1948, and went on to perform more than seventy roles there. His most acclaimed role was Falstaff in Verdi's opera, which he first played at the Glyndebourne Festival Opera in 1957. Died at a hospital in Aberystwyth.

This section lists the memorials where the subject on this page is commemorated:
Sir Geraint Evans

Originated in France as an album and then briefly as a show. Cameron Mackinto...