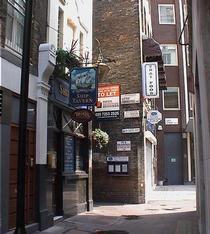 Founded: AD 1549. Rebuilt: AD 1923
The Ship Tavern
This tavern was established in the year 1549. During the proscription of the Roman Catholic religion it was used as a shelter for priests and services were held here secretly. The neighbourhood was once notorious for the gambling houses of Whetstone Park. Famous visitors have been Richard Penderell, who aided King Charles's escape, Bayford, shoemaker and antiquarian. The woman Chevalier d'Eon, who lived as a man, and Smeaton the builder of the first Eddystone Lighthouse. It was a centre of Freemasonry and a Lodge with the number 234 was consecrated here by the Grand Master the Earl of Antrim in 1786.

This section lists the memorials where the subject on this page is commemorated:
Ship Tavern

Businessman. Founder of the John Jaques and Son Toy Company, which produced a...

We really don't know if the Sebastian Earl who unveiled the stone at the Horn...

Chairman of the Port of London Authority in 1935.