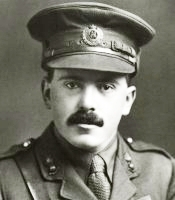 Soldier. Born Frederick Henry Johnson in Streatham. In an attack on Hill 70 in the Battle of Loos on 25th September, 1915, he was with a section of his company of the Royal Engineers. Although wounded in the leg, he stuck to his duty and led several charges on the German redoubt. For his actions he was awarded the Victoria Cross. He was later promoted to major and was killed in action whilst commanding 231st Field Company Royal Engineers in Bourlon Wood, France.

This section lists the memorials where the subject on this page is commemorated:
Second Lieutenant Frederick Johnson, VC