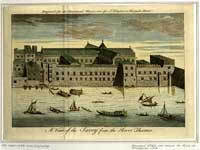 British History Online informs that a house was "built by ... Simon de Montfort, Earl of Leicester, in 1245; but in the thirtieth year of Henry III. it was granted by the king to by Peter, Count of Savoy ... " after whom it was then named. On the 13th June 1381, the Palace of the Savoy was burned and destroyed by rebels under the leadership of Wat Tyler. The palace was not restored but modified to serve as a prison. In the early 1500s, funded from Henry VII's will, the Savoy was rebuilt as a hostel and hospital for the poor. But it was used more as barracks and a prison. Most of it was swept away for the construction of Waterloo Bridge and the Embankment.

Our picture shows the Savoy in about 1760. It's difficult to determine quite when it ceased to exist but the Picture source website tells the story.

This section lists the memorials where the subject on this page is commemorated:
Savoy Palace

Architect active in 1877. We can find no information about him, which is unus...

Born Newcastle-Upon-Tyne, son of the Danish Consul and was educated in German...