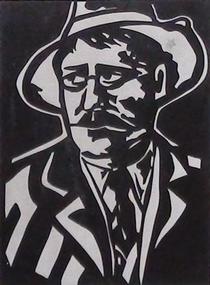 Anarchist and union organiser. Born Germany. Went to Paris in 1893. Came to London in 1895. 1897 attempted to enter New York with his lifelong companion Milly Witkop, but they were refused entry since they were unmarried, and they refused to marry. They returned on the same ship. Back in London he supported the emigrant Jewish sweatshop workers.

1914 arrested and interned as an enemy alien. 1918 returned to Germany via the Netherlands. 1933 he was back in London, and then went to the USA (with Milly even though they never married) where he died.

This section lists the memorials where the subject on this page is commemorated:
Rudolf Rocker

{Plaque near the entrance to the alley:} This project was carried out with Fr...

We believe we've identified the right Viscount Milton. As the son of William...