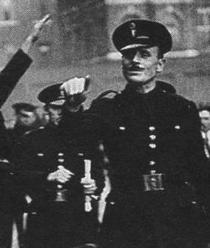 Politician and Fascist leader. Born at 47 Hill Street, Mayfair, into landed gentry, the sixth baronet. Served and wounded in WW1, leaving him with a limp. Entered parliament as a Conservative, married the daughter of Lord Curzon. Switched to Labour (over the Irish problem) but fell out with the Labour government and, after visiting Italy, founded the British Union of Fascists. Some of these, the "blackshirts" so frequently started racist riots that, after the Battle of Cable Street, the government banned political uniforms. Diane Mitford became his mistress and, on his wife's death, in October 1936 they were married in Berlin with Adolf Hitler at the reception. The Mosleys were imprisoned during WW2. After the war they moved to France and he died at home outside Paris.

This section lists the memorials where the subject on this page is commemorated:
Oswald Mosley

The plaque capitalises this as if it was a formal group but we can find no re...