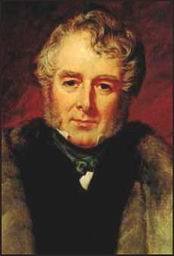 1805 married Lady Caroline Ponsonby who in 1812 had a very public affair with Byron. After 6 months Byron broke it off but this left her desolate and desperate. They both carried on their, now, failing relationship in public, referring to it in novels and poems. Melbourne attempted to support his wife but with his mother backing Byron this was not easy. By 1825 the marriage had broken down so they formally separated. Her mental and then physical health failed and she died in 1828 with Melbourne at her bedside.

As PM and 40 years her senior, he mentored Queen Victoria in politics from her succession, age 18 to 21. Following her marriage Prince Albert took over this role. Melbourne died at his country house at Brocket in Hertfordshire.

The city of Melbourne in Australia was named in 1837 for the PM at the time.

This section lists the memorials where the subject on this page is commemorated:
William Lamb, 2nd Viscount Melbourne

Prime Minister - and the only one, so far, to have been assassinated. Born Au...

Merchant and politician. Born in Manchester. Along with Robert Milligan, he w...