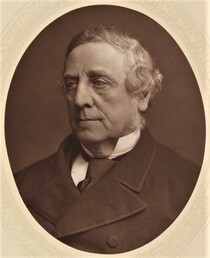 George Denman was born on 23 December 1819 at 50 Russell Square, London, the fourth son of Thomas Denman, 1st Baron Denman of Dovedale, (1779-1854) and Theodosia Anne Denman née Vevers (1779-1852). He was baptised on 15 February 1820 at St George's Church, Bloomsbury, where the baptismal register confirms that his father was a barrister-at-law and the family lived in Russell Square. The 1850 Post Office London Directory lists him and his father at 38 Portland Place, Marylebone.

His life is described in his Wikipedia page which confirms that he married Charlotte Hope (1824-1905) on 19 February 1852 in St Michael's Church, Toxteth, Liverpool, where the marriage register shows him as barrister living in London, whilst her address was given as Dingle Bank, Toxteth Park. They had six children.

Electoral registers in 1855 lists him as residing at 18 Eaton Place South with his legal chambers at 1 Tanfield Court, Inner Temple, London.

The 1871 census shows him as a Queen's Counsel, a Member of Parliament and a practising barrister living at 14 Eaton Place, Belgravia, with his wife, two of their children: Charlotte and Francis Richard Amory Denman (1862-1900), together with a cook, a housemaid, a nursemaid, a nurse and a footman.

He was appointed as Judge of the High Court in 1872, an office he held until 1892, and he is shown as such in the 1881 census living at 8 Cranley Gardens, South Kensington, with his wife, four of their children: George, Charlotte, Arthur and Grace, together with a butler, a cook, one male and four female general domestic servants.

On the night of the 1891 census he was staying with his wife, his butler and his wife's lady's maid at Osborne Hotel, 7-9 Hesketh Crescent, Torquay, Devon. On the census return he is recorded as a Judge of the High Court of Justice.

Probate records confirm that he died, aged 76 years, on 21 September 1896 at 8 Cranley Gardens, South Kensington, and that when probate was granted on 24 October 1896 to his barrister sons George and Arthur his effects totalled £12,527-7s-10d.

This section lists the memorials where the subject on this page is commemorated:
Rt. Hon. George Denman