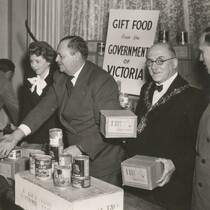 Our colleague Andrew Behan has researched this man: Reginald James Buckingham was born on 8 April 1887 in Exeter, Devon. He was the second child and only son of Frederick Buckingham (1857-1906) and Elizabeth Buckingham née Smerdon (1855-1892). His father was a carriage maker.

The 1901 census informs that he was living at 10 Chute Road, Exeter with his widowed father and both sisters. His occupation was recorded as a railway telegraph messenger and this is confirmed in UK Railway Employment Records that show he was employed by the Great Western Railway and was paid six shillings per week. On 20 January 1902 his pay doubled to twelve shillings per week and in February 1902 he was regraded as a telegraphist and transferred to Cardiff, Wales. Another pay rise on 20 January 1903 saw him on fourteen shillings per week and on 20 January 1904 it was increased to sixteen shillings per week. In January 1905 he was transferred to Newport, Dock Street, Wales. In October 1905 he was regraded as a Signal Porter and moved to Cardiff, Newtown and his pay was increased on 22 December 1905 to £1-1s-0d per week when he was regraded to Signalman and transferred to Alexandra Docks, Newport. On 24 May 1906 he was cautioned for his involvement in an engine derailment, but still received a further pay rise on 18 December 1906 when it was increased to £1-2s-0d per week. In July 1907 he resigned from the Great Western Railway and the 1911 census shows him as a clerk employed by a railway trade union residing as a boarder in the home of Fanny E Osmond, a widow, at 53 Lady Margaret Road, Kentish Town.

The 1922 electoral registers show a Reginald James Buckingham and a Lena Buckingham residing at 13 Woodfield Crescent, Ealing, but all electoral registers, local directories and telephone directories show the family address from 1925 as 2 Wormholt Road, Shepherds Bush. The 1939 England and Wales Register confirms this address and lists his occupation as a Trades Union Office (Finance Manager).

He was a Justice of the Peace and elected as a councillor for the Wormholt Ward of the Hammersmith Borough Council, serving as Mayor of Hammersmith from 1946 to 1949. He went on to be a Labour Party member of the London County Council from 1949 to 1952 and Chairman of the Metropolitan Water Board from 1956 to 1959.

His wife died on 30 September 1959 at Hammersmith Hospital, Du Cane Road, Shepherds Bush. He was granted administration of her estate on 6 November 1959 and was described in probate records as a retired commercial clerk. Her estate totalled £813-16s-10d.

He died, aged 84 years, on 1 January 1972. Probate records confirm he still resided at 2 Wormholt Road, Shepherds Bush and that when administration of his estate was granted on 25 April 1972 his estate totalled £8,233.

This wonderful photo (with Reginald at the right facing the camera) has been provided by Robert Buckingham, Reginald's grandson. We had not previously heard that, post-war, Britain received free food parcels from Australia. Robert adds that Reginald "was made a Freeman of the Borough of Hammersmith in 1956, and that he served on countless local and London-wide committees throughout the 1950s."

This section lists the memorials created by the subject on this page:
R. J. Buckingham

Stated mission: "To serve equally our members, our profession and the public ...