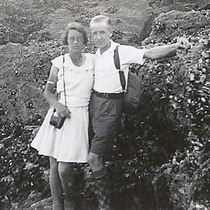 Auxiliary Fireman Ronald Mark Bailey was born on 4 August 1915 in Balham, the eldest of the four children of Mark Bailey (b.1881) and Violet Rosina Bailey, née Mann (1893-1972). He was baptised on 29 August 1915 at The Ascension, Balham Hill, Malwood Road, London, SW12 where the baptismal register shows the family living at 28 Dinsmore Road, Balham and that his father's occupation was recorded as a foreman.

Electoral registers show that by 1931 the family had moved to 10 Waldo Place, Mitcham, Surrey and to 31 Gorringe Park Avenue, Mitcham, by 1936. The 1939 England and Wales Register shows that he was still living at this address and that his occupation was an Assistant Buyer of Babies Prams. He was also shown as a member of the Auxiliary Fire Service at Mitcham, but subsequently transferred to Beckenham.

In late 1939 he married Stella Irene Lillian Taylor (1913-1974), a civil service clerk, and it is recorded on a public member's family tree on ancestry.co.uk that they travelled from their wedding on a fire engine. They lived at 81 Links Road, Tooting. He died, aged 25 years, on 20 April 1941 when a German parachute mine landed on Auxiliary Fire Service Sub Station 24U, which was housed in Old Palace LCC School, St. Leonards Street, Poplar. He was buried at Beckenham Cemetery and Crematorium, Elmers End Road, Beckenham, BR3 4TD. Probate records give his date of death as 22 April 1941 so it is probable that it took two days to recover his body. On 31 July 1941 administration of his estate was granted to his widow and his effects totalled £475-0s-0d.

He is also commemorated on the Firefighters Memorial and in their Book of Remembrance. His name is also recorded in the Civilian War Dead Roll of Honour that is held near the entrance to St George's Chapel, at the west end of Westminster Abbey.

Our Picture source says the photo, taken in 1936, shows Bailey with his future wife, Stella.

This section lists the memorials where the subject on this page is commemorated:
Ronald M. Bailey