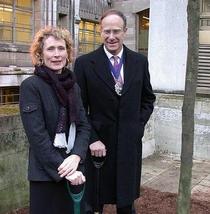 Robert Gerard Finch was born on 20 August 1944 in Ootacamund, India. (Now frequently known as Ooty but officially called Udhagamandalam, it is a town in the Nilgiri Hills). He was the son of Brigadier John Richard Gerard Finch (1911-2007) and Patricia Hope Finch née Ferrar (b.1914). His sister, Frances Angela Finch, was born in 1946 and her birth was registered in the Chelmsford, Essex, registration district.

In 1948 the family was living at Penketh, Ingatestone, Essex.

He was married to Patricia Ross in 1971 in Poole, Dorset. They had two daughters, Alexandra Patricia B. Finch (b.1975) and Isabel Sarah J. Finch (b.1978). The births of both daughters were registered in the Wandsworth registration district.

He established his name in the property industry at the law firm of Linklaters where he rose to become head of real estate.

He retired as a partner in 2005, taking up a role of a consultant to become chairman at Liberty International which he left in 2008 following its demerger from Capital & Counties. He left his position at Linklaters in 2009 after 30 years with the firm.

A member of the Worshipful Company of Solicitors and Alderman fot the Ward of Coleman Street he also served as Lord Mayor of London from 2003 to 2004. In the 2005 New Year Honours List he was made a Knight Bachelor for services to the City of London and was also an honorary member of the London Symphony Orchestra.

On 21 September 2016 a memorial service was held at St Paul's Cathedral.

This section lists the memorials where the subject on this page is commemorated:
Robert Finch

This section lists the memorials created by the subject on this page:
Robert Finch

The photograph we have found for Sue Roe and Robert Finch just happens to be ...