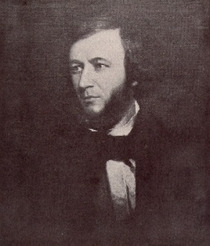 Poet and playwright. Born Camberwell. His works include ‘Home Thoughts from Abroad’ and ‘The Pied Piper of Hamelin’. He fell in love with Elizabeth Barrett and married her secretly because of her father’s disapproval. They escaped to Italy. Browning died Palazzo Rezzonico, Venice and is buried in Poets’ Corner, Westminster Abbey.

Browning's homes in London are remarkably well plaqued. Chronologically they should be visited: SE5, SE14, *, W2, W8. The * represents a plaque gap, 1846 - 1862, which is the period that the Brownings were on the Continent. When Elizabeth died, Browning returned to London with their son, Pen. In 1866 Browning's sister, Sarianna, came to keep house for him and stayed for the rest of his life. The W2 house, which was rented, developed defects and that prompted Browning to buy the W8 house. Pen married a rich American and lived in Venice in Palazzo Rezzonico, where Browning was visiting when he died.

From Londonist's Secrets of London's Canals we learnt that it was Browning that, having just returned from Italy, named the canals near his W2 home 'Little Venice' and the triangle of water there is know as Browning's Pool.

Fun fact: Robert Browning was not as well-versed in vulgar slang as he needed to be. He misread a bawdy 17th century reference to an “Old Nun’s Twat” as referring to part of a nun’s habit, and so he went on to innocently use “twat” in his poem Pippa Passes:
“Then, owls and bats,
Cowls and twats,
Monks and nuns, in a cloister’s moods,
Adjourn to the oak-stump pantry!”

This section lists the memorials where the subject on this page is commemorated:
Robert Browning

The cottage was 'Telegraph Cottage' which Browning described as "resembling a...

{Beneath a silhouette:}  Robert Browning poet, born Camberwell 1812, lived on...

This section lists the memorials created by the subject on this page:
Robert Browning