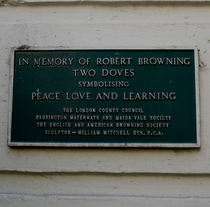 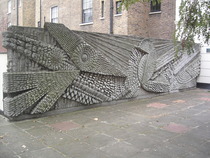 {Here is the text of the currrent (2015) plaque but that is in the process of being altered, see our comments:}
In memory of Robert Browning, Two Doves symbolising peace, love and learning.
The London County Council
Paddington Waterways and Maida Vale Society
The English and American Browning Society
Sculptor - William Mitchell Des. R.C.A.

2015: The attribution of this work, ‘Two Doves’, to William Mitchell is being changed to credit Malcolm Thackwray instead.  Mitchell has requested that the plaque be replaced to reflect this change.  The authorship of this sculpture has been confused:  There is documentary evidence that it was created by Malcolm Thackwray. He was at the time working in William Mitchell’s studio as an assistant and at Mitchell's suggestion entered the 1965 competition for a design for the Robert Browning Commemorative Sculpture.  Mitchell was involved in discussions about the design, which won the competition.  Thackwray produced the work in Mitchell’s studio using his specialist tools. Thackwray himself acknowledges an ‘obvious and inevitable Mitchellian influence’.

Google shows Mitchell’s career to be extensive and well-documented, in the distinctive style displayed on this sculpture. Thackwray's work can be seen at his website. Despite the facts, to us here at London Remembers it still looks like a work by William Mitchell, and we urge you to Google images for his name plus “sculptor” - his muscular, vibrant work is impressive.

The section of canal opposite this house, Browning's Pool, was named after the poet. We found the sculpture difficult to photo and our picture was kindly provided by William Mitchell.

This section lists the subjects commemorated on the memorial on this page:
Robert Browning - W2 sculpture

This section lists the subjects who helped to create/erect the memorial on this page:
Robert Browning - W2 sculpture

Plenty of Browning Societies exist, but we can't find one with this specific ...

This section lists the other memorials at the same location as the memorial on this page:
Robert Browning - W2 sculpture

These almshouses were erected in the year 1860 for poor inhabitants of the li...

This is an unusual, hand-made memorial. Although it looks quite old, historic...