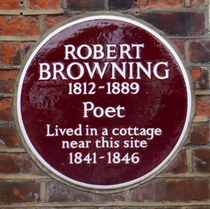 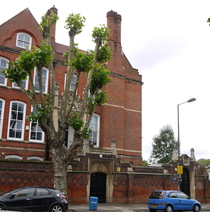 The cottage was 'Telegraph Cottage' which Browning described as "resembling a goose pie' but we can find no image. It was named for the telegraph station on what is now Telegraph Hill, a few streets to the south.

This section lists the subjects commemorated on the memorial on this page:
Robert Browning - SE14