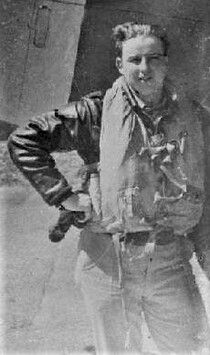 By July 1941 he was living in Coronado, San Diego County, California, USA, where he was employed by the Consolidated Aircraft Corporation.

On 26 January 1943 he was forced to ditch in the North Sea due to mechanical failure in his aeroplane and on 6 April 1943, because of smoke in his cockpit, he made a forced landing 3.5 miles off the coast at North Foreland Lighthouse, Broadstairs, Kent. He was promoted to First Lieutenant on 8 May 1943.

He was killed in action, aged 23 years, on 18 May 1943 when his squadron turned to engage a large group of German Messerschmitt_Bf_109 aeroplanes. In the ensuing dogfight, his Republic P-47 Thunderbolt aeroplane was set on fire and was seen to crash into the North Sea between Knokke and Blankenberge, Belgium. His remains have never been recovered.

As he has no known grave he is commemorated on The Walls of the Missing, at the Henri-Chapelle American Cemetery and Memorial, Rue du Mémorial Américain 159, 4852 Plombières, Belgium. He was awarded the Air Medal with 3 oak leaf clusters, the Distinguished Flying Cross and the Purple Heart.

This section lists the memorials where the subject on this page is commemorated:
Robert Boock