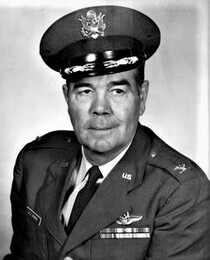 He joined the Royal Air Force Volunteer Reserve and served initially as a Pilot Officer in No.121 Eagle Squadron but was posted to No.126 Squadron in Malta in May 1942. According to the American Air Museum in Britain website he was transferred to the USAAF on 25 September 1942 while in Gibraltar. He was sent back to England but apparently was never assigned to their 4th Fighter Group. On 10 June 1945 he was appointed Commanding Officer of the 74th Fighter Squadron, 23rd Fighter Group, in China. He subsequently served in both Korea and Vietnam before retiring from the USAF as a Lieutenant Colonel.

This section lists the memorials where the subject on this page is commemorated:
Lieutenant Colonel Bruce Charles Downs