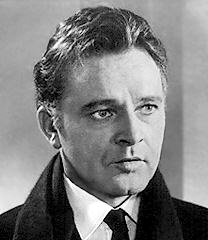 Actor. Born Richard Walter Jenkins at Pont-rhyd-y-fen, Wales. He was adopted by his English teacher Philip Burton, and took his surname. His first theatrical success was in Christopher Fry's 'The Lady's Not For Burning' in 1949. In 1954 he narrated the famous radio production of Dylan Thomas's 'Under Milk Wood'. He went on to appear in many successful films including 'Cleopatra' and 'The Spy Who Came in From the Cold'. Interest in his personal life was usually greater than in his acting; in particular his relationship with the actor Elizabeth Taylor, whom he married twice. Died in a hospital in Geneva, Switzerland.

This section lists the memorials where the subject on this page is commemorated:
Richard Burton