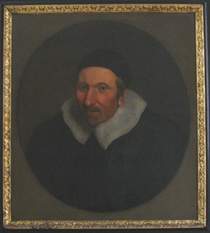 In 1656 he founded almshouses in Palmer’s Passage for six poor old men and six poor old women together with a school for the education of twenty boys. Old maps show these almshouses running most of the length of the east side of what is now Palmer Street (between Caxton Street and Victoria Street). This area was known as Palmer's Village in the early 19th century - see the picture source for more information.

Palmer encouraged Butler and Hill also to make donations to create almshouses. These almshouses were all consolidated together into the United Westminster Almshouses and re-erected in Rochester Row in 1881-2.

This section lists the memorials where the subject on this page is commemorated:
Reverend James Palmer

Archdeacon of London and Assistant Bishop of London.