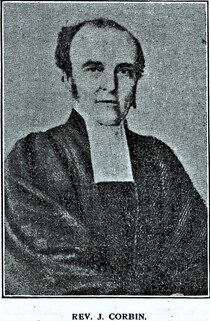 He was the Pastor of Park Chapel, Crouch End from its commencement in 1856 to 1871. The 1861 census confirms that he was an independent minister residing in Harringay Park, Hornsey, with his wife and his two sons, together with a cook and a house-maid. His elder son was described as a medical student and his younger son as a scholar. The 1865 electoral registers show him still at this address.

Probate records described him a Minister of the Gospel and confirmed that he died, aged 79 years, on 30 December 1890 at 34 Haringey Park, Crouch End, Middlesex. His will was proved by his three executors: his solicitor son, John James Corbin of 85 Gresham Street, City of London, Walter Hazell a printer of 15 Russell Square, Middlesex and a James Dix Lewis a chartered account of Penrhyn, Hornsey Lane, Highgate, Middlesex. His effects totalled £9,417-8s-1d. He was buried on 5 January 1891 in the burial ground in Finchley for the parish of St Mary's Islington.

This section lists the memorials where the subject on this page is commemorated:
Rev. John Corbin

Campaign promoting secularism and the separation of church and state. Founded...

President of the world Zionist Organisation, statesman and author. Born in R...