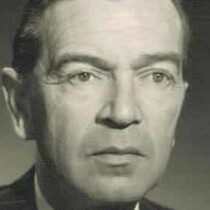 Led the modern development of Burtons Menswear, and was a generous benefactor of the Jewish Museum in London and the University of York.

Identical twin to Arnold - see there for a photo of the 4 Burton children and details of this family. Raymond moved to London to chair Peter Robinson, the women's fashion chain that Burton's acquired in 1946. That same year he married Pamela Flatau (whose sister, Barbara, his twin Arnold married.)

In London in the late 1980s he purchased a Grade II listed building for the Jewish Museum, and in 2002 supported the purchase of an adjoining former piano factory into which the museum successfully expanded.

This section lists the memorials created by the subject on this page:
Raymond Montague Burton

From COSGB: "LEP Transport was a freight company established in 1910 in Londo...