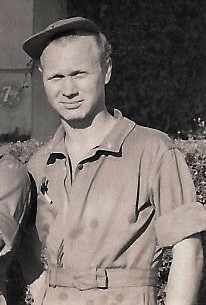 Pilot Officer, 121 Eagle Squadron, American, killed.  The following was sent to us by Angela Murphy:

The following tribute was given at the Memorial Day program held May 28, 2012, at Caledonia, Minnesota, USA. The speaker was Barbara Rollins, middle school teacher at Caledonia Area Middle School/High School. The text was researched and written by her sister Angela Murphy

Seventy years ago this month, a 31-year-old pilot from Eitzen, serving with the Royal Air Force in England during World War II, died when his plane crashed into the English Channel.  Today, we honor and remember Ralph Freiberg.

Ralph was the son of Edmund and Malinda Deters Freiberg.  He was born April 25, 1911 and had one older sister, Viola.  His father Ed was a businessman in Eitzen,  where he had a blacksmith shop and also had a garage where he did auto repair and sold tires.  The family home is still there, the oldest house in Eitzen, at 115 Main St.

Ralph graduated from Caledonia High School in 1929 and studied at the University of Minnesota.  Following his graduation from the U, he began flying with the U. S. Naval Reserve.  He lived in Texas and later received advanced flight training in California, alongside Canadian pilots who were training to fly in England where the war was raging.   He left for Canada in October 1941 for more training in preparation for his enlistment and from there he was sent to England for commission in the Royal Air Force.

What motivated him to join the RAF?   Was it like most decisions we all make. . . . a combination of factors?  He loved to fly and by training with Canadians who were preparing to go to war in England he must have felt the urgency and the need for pilots.  He had flight experience and could make a contribution.  Still, it was a bold move.   When he left for England, the United States was not at war and was technically an isolationist nation.  Many Americans, however, did leave the United States to fight for England.

He was a member of Eagle Squadron 121, one of three Eagle squadrons manned by American volunteers who joined the RAF prior to the United States entering the Second World War.

In a letter dated December 2, 1941, just days prior to the bombing of Pearl Harbor, Pilot Officer Freiberg  wrote a letter from his base on Houghton Road, London {we cannot find a Houghton Road in London so we think this is a misunderstanding – the base is unlikely to have been in London}, to Ray Ryan, my father, and publisher of The Argus.  Because of censorship restrictions and the time it took for mail to reach here, the letter was not printed in the paper until late January of 1942.

Well, I imagine that by the time you get this you will have had your fill of Christmas turkey which I wish I will have had. I sincerely envy you.  Our trip across was quite uneventful, although the sea was pretty rough and we didn’t average over 6 knots per hour – being in a slow convoy of about 50 ships – so it took us over 15 days.

A complete blackout on all the ships, all night, sort of prepared us for the blackout over here in which it is pretty difficult to navigate.  All public places close at about 9:30 and buses quit running at 10 so there is not much danger of lack of sleep.

Certain foods are plentiful but quite different from what we are accustomed and naturally the luxuries such as oranges, sugar and butter, etc. are well nigh unobtainable.

I am now at an operational training unit in northeastern England – flying Hurricanes which are pretty nice – about 1050 H.P. and well over 300 mph.  Will be here until the middle of January after which I understand we will go to the Eagle Squadron.  As yet, I have heard or seen no enemy action but only because I haven’t been at the right place at the right time.  The first night I arrived, we were greeted by air raid sirens but no bombs were dropped.  There are about 20 fellows over here that I knew in the States – but of course, they are stationed all over the country and I don’t get to see them much.

The weather has been lousy – so we haven’t been able to do much flying – but we have been flying in weather which would have grounded everything in the States – good practice providing you are perfect in your practice.  Of course, I guess that is why Sherman was correct in his opinion about war.

The country is quite nice although everything is done on so much smaller a scale than over there and that is a bit difficult to get used to at first.  Every square foot of ground is used to advantage and the farms looked like a group of gardens surrounded by hedges.  Ireland, I think is the prettiest country – looked almost like a picture.  (I know that should please your ego.)  Most of the cities here still indicate the terrific beating they took last year during the Blitz, although some repairs are being made to some extent.  Well, Ray, I’ll drop you a line next month and if you have time write to me.  Say hello to all my friends.

In the spring of 1942, with the United States in the war, Pilot Officer Freiberg was expected to transfer to American forces.  On May 4, 1942, however, while on a mission reportedly flying a Hurricane combat plane, he failed to return to his home base and was listed as missing.

Publisher Ryan wrote: “Knowing him as we did through the years of high school as a teammate on the basketball floor and in many other fields of fun which fall to those in the years that follow after high school, we cannot help but look for many rays of hope that the report of him as missing nevertheless will find him still clinging to all that is life. ..  “

He is, however, remembered for his sacrifice.

The Veterans Memorial in the Houston County Courthouse Square, which honors our county’s soldiers who lost their lives in all wars, has Ralph’s name inscribed there.  The memorial reminds us “Freedom is Not Free.”  You may decide to visit that memorial today and acquaint yourselves with those names.

England has not forgotten, either. The British showed their gratitude and respect by building memorials to soldiers from other countries who fought at England’s side.

“They served with valor,” reads the inscription on the Eagle Squadron memorial near the U. S. Embassy in Grosvenor Square in London. The pillar has an eagle clutching arrows in its left claw and what may be an olive branch in the right.  It is dedicated to the memory of the 244 American and 16 British fighter pilots and other personnel who served in the Eagle Squadrons.   Ralph’s name is there.

At the magnificent St. Paul’s Cathedral in London, designed by architect Christopher Wren and completed in 1710, is the American Memorial Chapel  and the Roll of Honour book containing the names of over 28,000 Americans who lost their lives in the Battle of Britain.   The book is under glass and every day, someone wearing white gloves turns the page so that over time all 28,000 names will appear. Ralph’s name is in that book.  When contacted by e-mail to verify that Ralph’s name was there, a staff person at the Cathedral said he would make the effort to see that the page with Ralph’s name was open on this, our Memorial Day.

The Air Forces Memorial at Runnymede on Englefield Green, 20 miles southwest of central London on the River Thames commemorates the over 2,000 airmen who were lost in World War II.  All of those recorded have no known grave anywhere in the world and many were lost without a trace.  The names are engraved into the stone walls of the memorial, according to country and squadron.  Ralph’s name is there.

St. Luke’s Church in Eitzen, has a Gold Star Honor Roll in memory of those soldiers from the church who died in combat.  Ralph’s name is there. He was the only one from the church to have died in World War II.

I pray that future generations are mindful of the great sacrifice which was offered that they might live in freedom and that these memorials of the fallen in war will speak to them not only of the heroic devotion to duty in conflict, but of the need for finding the way to peace based on justice, so that never again will the fiery trial of war put the human race and its highest values in deadly peril.”

Post script: A year after Ralph was reported missing, his death certificate was sent to his father as was a condolence card from the King and Queen of England.

Our colleague, Andrew Behan, found the image of Pilot Officer Ralph William Freiberg and the picture source gives much information about the man. Contrary to the information given above by Angela Murphy that he was flying a Hawker Hurricane aeroplane, he was last seen, aged 31 years, on 4 May 1942 when his Supermarine Spitfire Mark Vb, Serial Number P8794, was shot down by a Focke-Wulf Fw 190 off the French coast when escorting Boston aeroplanes in a bombing raid on Le Havre Power Station, France, in the same action where Pilot Officer Robert Vincent Brossmer was also killed.

He is commemorated on Panel 69 of the Air Forces Memorial at Coopers Hill Lane, Englefield Green, Egham, TW20 0LB that containes the 20,456 names of men and women from air forces of the British Empire who were lost in air and other operations during World War Two and who have no known grave.

This section lists the memorials where the subject on this page is commemorated:
Ralph William Freiberg