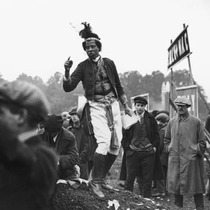 Horse racing tipster. Born as Peter Carl Mackay in what are now the US Virgin Isles, into a horse-breeding family, though his story was that he came from Africa, via an interesting narrative including kidnapping and shipwreck, to New York. From New York he came to London in 1902 where he took up his chosen career and where, as you can see, he dressed for attention.

He frequented Petticoat Lane and Mile End Market but travelled widely and led an interesting romantic life all of which is documented, with enhancements, in his 1950 autobiography, "I Gotta Horse: The Autobiography of Ras Prince Monolulu". Died Middlesex Hospital.

This section lists the memorials where the subject on this page is commemorated:
Prince Monolulu

Elected President of the International Olympic Committee in 2001 and 10 years...