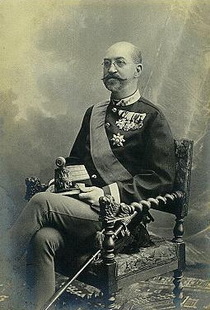 Born in Hanover as the Crown Prince of the Hanoverian royal family but also related to the British royals. In 1878 he became Duke of Cumberland and Teviotdale on the death of his father, the 2nd Duke, and was knighted by Queen Victoria a few months later. Already a colonel in the British Army he was promoted to lieutenant general in 1892 and general in 1898.

Being the eldest son of a king he probably expected to acquire more power in his life than he actually did. The politics of the time meant he lost the thrones of Hanover and of Brunswick. Come WW1 his German origins meant that his British peerages and honours were taken away.

This section lists the memorials where the subject on this page is commemorated:
Prince Ernest Augustus, 3rd Duke of Cumberland and Teviotdale

When this pub was built in 1892 the Duke of Cumberland was Ernest Augustus, t...

According to Wikipedia: a legendary 2nd-century King of the Britons tradition...